What is Talent, Really, Anyway?

What is Talent Really, Anyway?

Everyone wants talent, but what is it?

Talent: Individuals seek to develop it. Companies want to identify and retain it. Succession planners search for it. Politicians plan for it.  The world wants it. There’s even a war for it. But what is it exactly?

The word “talent” is bandied around for so many things, and we don’t always truly understand what is meant by “talent”. This is a real problem because over the centuries, the term “talent” has morphed and become a floating signifier and become a reference to something beyond real life. Something indefinite and indefinable. So when organisations, Human Resources and leaders spend large sums of money on “talent” in “talent management” or “talent development”, neither they, nor we, truly know what they mean or to what they refer.

Why does this matter?

What if you have a pink pill that makes your work almost effortless, yet simultaneously fulfilling. Every moment at work you are in the zone. You're flowing and your performance is so good, and your productivity increases and you are more engaged with your work and with your colleagues.

The company who made that pink pill would be worth gazillions and businesses would be clamouring for their workers to take this magnificent drug, so they could profit even more and keep staff happily employed and engaged for years to come at higher wages with shorter working hours and greater productivity.

Well those pink pills would be flying off the shelves faster than a speeding bullet.

That’s the promise and advantedge of leveraging talent.

If we’re going to be seeking it, identifying it, retaining it, planning for it and spending large sums of money on something so critically important to our future success — shouldn't we know what it is?

So, to the trusty dictionary…

Terrific, and what is innate?

Now, my core business is neuroscience based coaching for behaviour change, so if talent cannot be acquired or developed … Better find a better definition…

Talent: natural ability to do something well.

Natural: based on the state of things in nature; constituted by nature: Growth is a natural process.

It seems that you are either born with a talent or not. No acquiring a talent, using it certainly, but if the foundation is not there…

Companies seek ‘talent’ for succession planning, as do politicians. It is most often associated with leadership or management ‘talent’.

Companies are also hooked on retaining talent. And surely that’s right, once you have talent in your organisation, you really don’t want to lose it. Many, inspired by a Mckinnsey article in 1997 “The War for Talent” took this to extreme, indulging ‘talent’ and doing everything they could to keep them engaged, satisfied, even delighted. Malcolm Gladwell, author of The Tipping Point, wrote an article in the New Yorker magazine in 2002 entitled “The Talent Myth”. By then the whole ‘War for talent’ was under a dark, ominous cloud called Enron. The McKinssey article had, after all, been largely based on what Enron was doing at the time and how everybody should emulate it.

The trouble is that ‘talent’ is most often ascribed to the very brightest, highly motivated individuals who are very driven. And being bright (intelligent) does not, necessarily, mean talent. Being ‘driven’ is not the only criteria for success.

Time for a little etymology (a fancy Greek based word for the history of a word).

Talent is most often ascribed to first being used in the Bible. The Hebrew term for "talent" was kikkār, a flat, round gold or silver disk, or circular-shaped loaf. In the Greek language, the word comes from tálanton, a large monetary measurement equal to 6,000 drachmas or denarii, the Greek and Roman silver coins. (Etymonline)

A person with a talent of Gold (even today) would be considered wealthy and successful. At USD60,000 per kilo in 2021 and a talent weighing around 35 kilos… that’s a couple million USD.

“talent “ in the late 13th century meant "inclination, disposition, will, desire," from Old French talent (12c.), itself from Medieval Latin talenta, plural of talentum "inclination, leaning, will, desire" The Medieval Latin and common Romanic sense developed from figurative use of the word in the sense of "money." Meaning "special natural ability, aptitude, gift committed to one for use and improvement" developed by mid-15c., in part perhaps from figurative sense "wealth," but mostly from the parable of the talents in Matthew 15.14-30. It was John Calvin, according to Paul Marshall in his book A Kind of Life Imposed on Man: Vocation and Social Order from Tyndale to Locke, helped shape the modern meaning of the word talent by his revolutionary change in the interpretation of the parable of the talents.

Calvin defined the talents as gifts from God in the form of a person’s calling or natural ability.

For the kingdom of heaven is like a man traveling to a far country, who called his own servants and delivered his goods to them. And to one he gave five talents, to another two, and to another one, to each according to his own ability; and immediately he went on a journey. – Matthew 25:14-15 (NJKV)

If the concept of talent has its roots in measurement, power and success, then why is evaluating and measuring talent a concept business leaders struggle with? Is it simply just the idea of having the most talent that lends to creating and growing a successful company?

The history behind talent and our inability to effectively measure or assess talent is irony at its finest.

What if talent isn’t innate?

Earlier we learnt that talent is something you are born with. There is no acquiring it or developing it. Yet, in his hugely popular book “The Talent Code”, Daniel Coyle challenges that: saying that greatness isn’t born but grown. It’s not a gift but something that you develop with deep practice, ignition and master coaching.

Talent, according to Coyle, is to do with the myelin coating of the neurons in your brain. The more you practice a skill, the thinker the myelin sheath and the faster those neurons fire, making the whole process increasingly effortless.

When you practice something, you repeatedly send electrical impulses along neural circuits in your brain. This triggers the development of myelin around the nerve fibres. Thicker myelin allows faster and more precise responses, until the skills seem automatic. They look like talent.

I have to agree completely with Coyle (heck I am in the development business right). Many experiments in neuroscience have shown that repeated practice of specific skills increases myelin thickness, which means that the signals process through those fibres are faster and have less noise or interference - thus the good data gets through more often first time and your response is faster. It’s like the plastic coating on the electrical and communications wires in your home and office.

This means less energy used by the brain, and less deliberate, conscious effort. Enough practice and (this is where I diverge from Coyle) your skill adeptness looks just like talent. So much so, that people will call what you are doing “talented”. Of course, they don’t see the years and hours of deep practice that you somehow achieved “overnight”.

I like to use the Conscious Competence Learning Model to show you how this works.

In this model, there are four stage of developing competence in doing something: 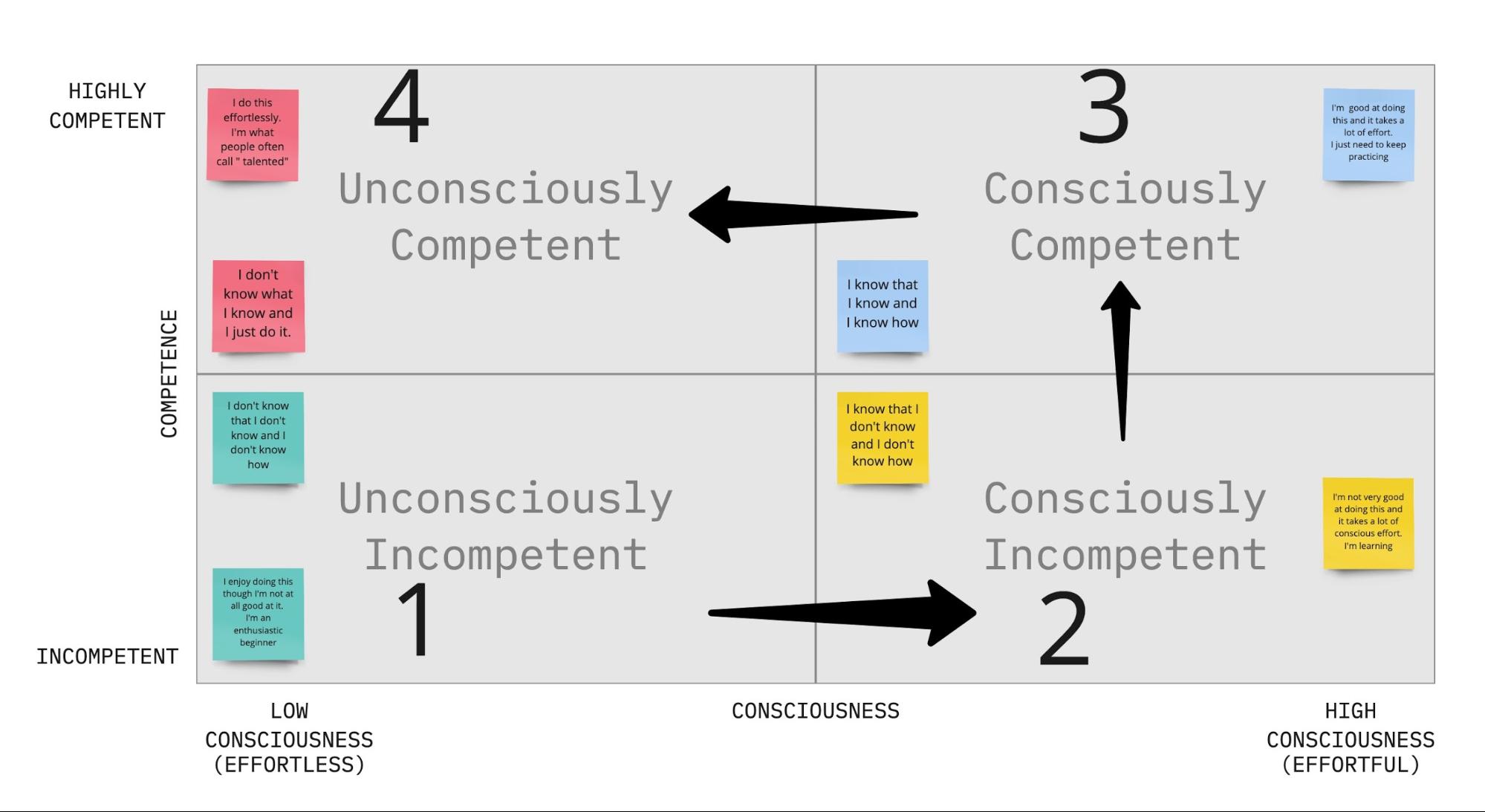 This skill and it’s knowledge has become deeply ingrained and no longer requires any conscious thought or effort on our part. It looks exactly the same as a “talent”.

A “talent” on the other hand is a giftedness that you have. It’s something that you do without having had to practice or learn. You will have little if no idea about how you do it.

It’s what Mozart had at 4 years old when he sat before a piano for the first time.

It’s a gift. It’s deep practice. Do the semantics matter?

I think it matters a whole heap. It’s what happens when what looks like talent gets labelled as something it isn’t.

I've seen this in many organisations. The brightest and best are identified as part of the “talent” pool – there’s some fanfare, a suite of training programs, perhaps MBAs are taken and the “talent” are promoted.

Meanwhile, the “non-talent” morale has sunk, employee engagement has plummeted to new lows, many have quit or are actively updating their CV and LinkedIn Profile seeking new positions, commitment has dropped and performance suffered.

The “talent”, being highly driven, take this upon themselves and try to make up for the loss, working extra hard and many burning out. There follows a new initiative to regain the work-life balance and a big drive to retain talent.

Check out Billy Adamson’s 2016 paper published in Philosophy of Management for a comprehensive and rigorous debate on the vital importance of knowing what talent means.

I do believe that we should identify talent because it can be the key to unstucking your true potential and unleashing your performance and sustaining it for the long term.

And it is only when you are employing your real talent that you truly shine. All is well with your soul because you are using your gifts, your work is almost effortless and fulfilling. Every moment you are in your flow zone and your performance is astounding. Your productivity increases and you feel truly engaged with your work and your colleagues. You just took the pink pill.

When it's the result of deep practice, master coaching and ignition. All the above may be true for a time, even a long time. But eventually, it seems that the thrall pales as the ignition moment fades in memory and you begin to wonder what it was you loved so much to make you practice so deeply for so long.

Organisations spend a long time and vast sums on managing and developing and retaining “talent” and miss something critically important. Which is:

Everyone, you, me and Bob next door, all have talent. You might not know what your talent  is yet. But I can assure you that you do have a natural giftedness for doing something. It will be something that you do exceptionally well and you, almost certainly, thoroughly enjoy doing it. Or at least, you used to enjoy doing it. The problem for most people is that they no longer have the opportunity to do what they are talented at doing because, in and of itself, it doesn’t pay the bills.

After years of research in developing and evaluating competence and competency and working in the talent management and development field, teaching, training and coaching I conclude that talent is your natural giftedness to do something. You may not be using it but everyone has talent!

The skills and abilities we develop through deep practice are a component of our potential. They can be developed such that they closely resemble a talent. To do that we’ll need to UnLock your talent to UnStuck your potential.

Sure, there are some people who show greater abilities than others. But all three servants were given the opportunity to grow their talents according to their abilities. Maybe your natural talent is something that is valued in this world, maybe you’ve had to pivot, adapt and do something that you can do well enough but is far removed from your talent, but it pays the bills.

What if I told you that you can find and use your natural giftedness by UnLocking your talent and leverage the process to your advantedge, that you can do so effortlessly and well, in a completely different field? One that you do almost effortlessly, find fulfilling and engaging and does pay the bills.

How much would that advantedge be worth to you?

We call it the AdvantEdge Potential to Performance System and I’m happy to share details about how it can work for you and your team.

To leave or reply to comments, please download free Podbean or